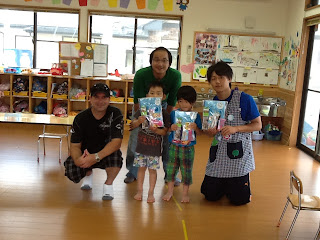 We delivered them at the end of the children’s nap time, so only two of them could make it in the picture. However, everybody was very happy to receive the stationary kit! We hope that they will enjoy studying with these gifts!
Posted by セカンドハーベスト・ジャパン at 10:55 AM 35 comments:

Jack Came to Volunteer with Us!


Hello, this is Shibata from 2HJ’s Ishinomaki Office.
We had volunteers come and join us from Tokyo this week and last week.
Let me introduce Mr. Jack, one of the volunteers who stayed with us for two nights at Ishinomaki.
Mr. Jack flies from the U.S. and stays in Japan for 2 months every year. He joined us for volunteering at Ishinomaki last year as well.
As soon as Mr. Jack arrived at Ishinomaki, we had him come with us to temporary houses of earthquake survivors and post flyers with info on food support as well as deliver some food packages. We also had him help us out with unloading food we received from Food Bank AGAIN. 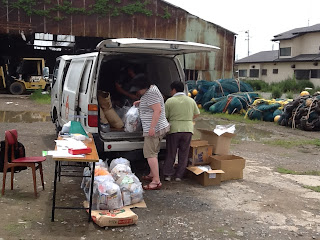 On Saturday, Mr. Jack and local residents helped us out distributing food.
(Unfortunately, the picture does not show them clearly since shows since they are working in a van.) 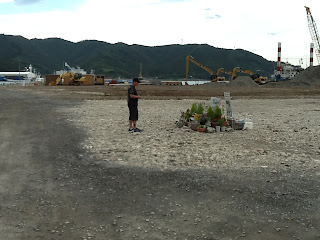 After distributing the food, we went to Onnagawa-cho (a town) with Mr. Jack, since he had never been there before (the picture above shows Mr. Jack standing by an alter with flowers.) 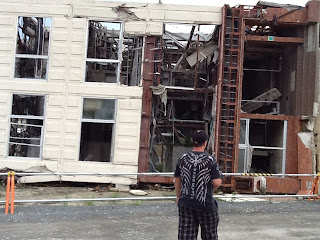 He seemed to have been shocked seeing the four story building destroyed by a tsunami.

Mr. Jack was so much help for us! Thank you so much!
He said that he will visit us in Ishinomaki again when he comes to Japan next year. See you then!
Posted by セカンドハーベスト・ジャパン at 10:54 AM No comments: 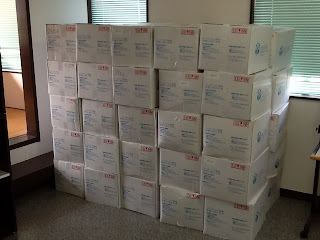 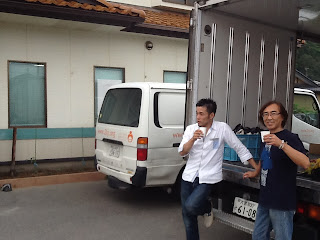 A refreshing drink after the delivery (left: Otake, right: Watanabe)

Thanks for your hard work, you two!
Posted by セカンドハーベスト・ジャパン at 1:42 PM No comments:

Hello, this is Yuji Shibata.

Food donations from Lab-Bank arrived at Second Harvest Japan’s Ishinomaki Office in large amounts last Saturday. Thank you very much to everybody from Lab-Bank!

We received support from OS Liner to deliver these items from Tokyo to Ishinomaki.
OS Liner has agreed to continuously support us with deliveries. Thank you for your cooperation.